The Place Where They Live

‘Presence is our duty, be it only for a moment’ Goethe (notice on Peter Black's darkroom wall)

Disquietude And Its Characters

" How little, in the real world, forms the basis of the best reflections—the fact of arriving late for lunch, of running out of matches, of throwing the matchbox out the window … the fact I'm nobody in the world …’ So utters the narrator in Fernando Pessoa's The Book of Disquietude, a character Peter Black might cite as a kindred spirit, the two of them perambulating through the roads and paths of their separate cities, both of them gatherers and orchestrators of observations—of things seen and thoughts, as we say at home, thunk. Peter Black cultivates a certain distance and might be described as a Pessoa-esque ‘realist’—that is, an individual ‘for whom the outside world is an independent nation". read more

Gregory O'Brian is a poet, essayist and artist. Between 1997 and 2009 he curated exhibitions at City Gallery Wellington including Peter Black's Real Fiction, a survey exhibition of Peter's work.
Mark Amery — Snap Happy

You don't actually need a camera to take cheap and cool photos. Simply build yourself a pinhole camera (out of an oatmeal box, even), download PinHoleCalc (freeware, Mac) to calculate the optimum pinhole diameter and exposure time (or just do your best with this handy, dandy chart), and you might just create some amazing things. [http://www.hotwired.lycos.com/webmonkey/frontdoor/monkey—bite] Made by the Great Wall Plastic Factory of Hong Kong in the 1960s, the Diana Camera is a cheap plastic toy camera that has left an odd photographic smudge on our art history.
read more

Mark Amery has published and broadcast extensively about the visual and performing arts.
The work discussed in Snap Happy is Autoportraits 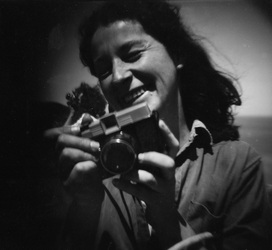 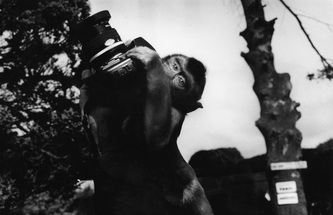 Ian Wedde - At Home In The Dark


In the kitchen at our place hangs a photograph of the square in Palmerston North when the PDC department store still had the Kiwi Bacon kiwi on the roof [p81]. The flightless bird is poised in a kind of awkward plié next to the sign of its name ‘in lights’ (at night that would be) but in the darkness of daytime it is a black silhouette beside the black billboard stencil of its name against a washed-out sky. Though captured in a ‘first position’, the dumpy, earnest bird is not about to rise or jeté into an apotheosis in the sky above the provincial town whose sign it, haplessly, is read more.

Ian Wedde is a poet, novelist, critic and curator. His essays have been collected in How to be Nowhere (VUP 1995). From 1994 - 2004 he was head of art and visual culture at the Museum of New Zealand Te Papa Tongarewa. In 2009, Auckland University Press with RGAP (UK) published his monograph Bill Culbert: Making Light Work. He has also written about Peter Black's photographs in At Home in the Dark (2003) and i loved you the moment i saw you (2011). 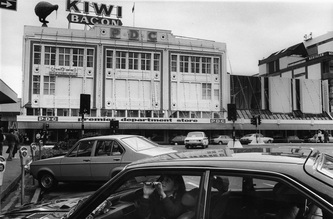 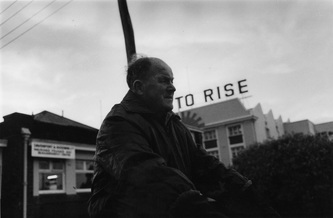 I expected to be writing this
up late
surrounded by books, music playing quietly,
having a bit of a think
I think I thought
I'd think about
Peter Black and Robert Frank,
about the darkness
that seems to be at the centre
of a lot of New Zealand art
or seems somewhere
to haunt it
& figured I'd have trouble
separating this
from the literal darkness
especially as the latter
signals the former most often—or is there in its stead.
As a literalist
which for the most part I am
it is the literal darkness I see most
—see only,
tho I intuit occasionally
that it is
symptomatic
of something else.

I was going to make some comparisons
of New Zealand & Australian attitudes
to this
‘metaphysical dark’
Tho ‘metaphysical’
I never have a firm handle
on it—
a bit spiritual & a bit
ontological,
is that it?
where the bodies go wobbly & out-of-phase
on Star Trek or
The Outer Limits , indicating some
redistribution of particles
thru a wooze-machine
to another time or form?
Uri Geller—
is that metaphysical?
This is to invite being
written off
as a lightweight, I know. I'll stop.
The
thing I was going to suggest
was—
the
New Zealander's quieter,
greater confidence
stems
from facing this darkness more directly. Australians
it's often held are nervous of the empty interior—
to which we keep our backs. Inverted commas
come in here flocking to save the words from bald
assertion, naivety—
i.e., held by whom, not
me
then there's ‘empty’—it's not ‘empty’
& who
believes this crap anyway? I never think about
the dark, empty, arid interior.
But then is there
an Australian more nervous?
And it's true
‘true’—
can you say that?—Australians worry about who
they are
New Zealanders seem quite sure
Tho
our art seems sunnier
—disposition-wise.
Tho ,
New Zealanders
do daggy better
a kind of recognition
of the dark abyss
thru laughing at it?
In Melbourne
our daggy merely forgives the inevitable failure of
everything…to live up to its pretensions.
Not so dark
you see.
So we have Tony Tuckson:
you have McCahon
we have Bill Henson, you have
Peter Black.
I prefer Tuckson & Black
McCahon seems always
more ‘Steptoe’ than ‘Beckett’
Henson too obvious
in the pathos & the Beauty
—he ‘quotes’ them, sure
a cake he'd like to have and eat
‘                                           have’ as if he
didn't care, ‘eat’ as if shielded by irony…
incriminatin’
is partly its business
—as if to feel dirty was to feel modern.
Take Black's dog at night in the back seat of the car,
the peacock in the park,
the politician on election night
amid balloons, the narcissus seal.
I like all these
& liking, responding to them
seems the point.
A
Henson photograph's point is our thinking, our unease
about our response.
Black's work might be from an
earlier era
which is the way—or is why—
the comparisons
with Robert Frank's The Americans.
God,
this
is the first morning I've had free
to write like this
for ages. I'm not up late at night, Greg—
it's
just past 10 a.m.
in a coffee shop in Hindley Street
(Adelaide)
the waitress wears no lipstick this morning
but otherwise it's exactly where I always am,
looking
at some older Italian guys rabbitting on at a table outside
(I look thru the glass—the radio is on, coming
from a speaker above my head—a girlie voice singing--
bright sun, traffic outside,
bright gleam,
from a metal
rail outside &, much brighter, bouncing off a car
over the road. I look up
to confirm there's nothing
interesting
to say about it
—other than that it's black—
& it's gone.
Another Richard Estes morning
that only I have
in Adelaide
because I think that way
yes, I, only I!
And that's ‘daggy’ Adelaide-style.
We can dream
of being cosmopolitan
but we can't be (cosmopolitan).
The failure thesis
once again
(tho I had it first only a moment ago—
do I really believe in this?)
It is probably easier in Wellington
to be confident of your place in the world.
Why?
Don't ask:
more geography rings you about
you remember constantly
two islands, north & south, volcanoes,
shipping,
& the clouds
roll by overhead
as if reeled.
You think, ‘edge of the
world’
& there's the darkness
plus the fierce Presbyterian
puritanism.
Now that's dark.
The photographs seem
symmetrical, balanced
—the monkey with the camera,
the woman
lying in the park, the nun (her gesture, the cross
below her face),
the Maori biker gang—
which says
look at this
evidence, things captured, glimpsed
but too artlessly to have remembered to ‘look’ artless.
The bunny garden gnome,
the seal
are joking recognition of the ‘human condition’
—pathos, ‘suffering’
& the way animals—like cartoons—
illustrate it
so we get to have our pity
but not expend it—
because these are jokes
& on
the woman politician, the woman asleep on the grass
we expend a far more real, & realistic, recognition—
of the human
—in specifics, not an allusion (the seal's
Narcissism, the dog's beseeching).
Carol Jerrems
makes a contrast
an Australian photographer
much more
concerned with the relations between people
in her photographs.
Robert Frank's America was far more various
than New Zealand
far more diverse—& tense with it—
less cohesive
more
policed & coded
micro-managed
Peter Black 's Maori bikers
is not a Robert Frank picture
less bizarre
less alienated
pictures New Zealand can assent to
the way America could not
to Robert Frank's.
The more limited truths, the
depth & singularity of New Zealand.
All the stuff
I didn't want to find I'd said.
Photographs are great
the way they raise up all that is irrelevant or
not
quite the point about them
—& they remain,
you
can hold them in your hand
but you can't put
your finger on it.


Ken Bolton is an Adelaide-based poet, publisher and critic.